Before 1066 this area had been settled by Anglo Saxons and Nordic people. Local ‘cruck’ barns are directly related to building techniques of this period.  After the Norman Conquest under William ”The Bastard” in 1066 huge tracts of land in the north were given to Ilbert de Laci, one of his leading nobles, in return for his services.  Ilbert de Laci built Pontefract castle (Shakespeare’s Pomfret).  In turn Ilbert allocated parcels of his demesne to lesser nobles and knights.  One of these, Henricus Teutonicus del Teis, was given lands around what is now Huddersfield.  He settled at nearby Slaithwaite Hall (still extant).  The name Teis, in time, became Tyas.

Through complex interactions over the years control over most of the lands passed into the hands of the wealthy Kaye family (they built the fine Elizabethan manor house in Slaithwaite (pronounced ‘Slawit’).  The last surviving Kaye married the 2nd Earl of Dartmouth.  Their family name is Legge.  The Legges were close to Charles I and Charles II, who ennobled them for their services to the Royalist cause during the Civil War.  Most of the land around Merrydale still belongs to the Dartmouth Estate – which was administered from the lovely manor house in Slaithwaite.  The much married Countess of Dartmouth, daughter of Barbara Cartland, remarried to become Lady Raine Spencer, Princess Diana’s unloved stepmother.

Merrydale settlement was attached to the first water powered mill in the Colne Valley.  It was a fulling mill and the dam, part of which still exists within the front garden of Tyas House, was made to power it.  A remaining wall from the mill can be seen immediately below the dam.

Wool from the pastoral economy, the very soft water and water power from the hilly Pennines led to the creation of the mill at Merrydale and the further unfolding of the industrial revolution.  From the late 17th century outworkers from the surrounding farmhouses used to bring their pieces of woven wool up to Merrydale Clough and through the doorway (that is still in place) to the mill for treatment.  Urine was used to take out the natural oils (lanolin) from the wool.  In what is now the hall in Tyas Cottage there used to be a large stone pit (about 1.2m x 1m x 1m) for the storage of urine.

If you walk down Merrydale Clough, about half way down you will find that several enormous stones have been positioned in the stream.  These were used for fulling before the mill was built (fulling is a method of tightening the weave of cloth by shrinking).  Imagine treading the wool in the winter!

Although the first part of Tyas House was built towards the end of the 17th C, the barn and cottage that now make up Tyas Cottage were built about a century later, the cottage preceding the barn. Tyas Lane, including the track that extends up the opposite hill, is an ancient pack horse route linking Halifax and Manchester.  The old narrow pack horse bridge can still be seen underneath the 19th C bridge that has been built on top of it.

Archaeologists have found the route of the main Roman military road, about ½ a mile down the clough (stream) and excavated sections of it. It crosses the stream just above the bridge at Clough House and used to link York to Chester. A Roman fort and part of the road have also been excavated at Slack, near Outlane (close to Junction 24 on the M62).

The Restoration of Tyas Cottage

Both Tyas House and the barn that now forms part of Tyas Cottage are Grade 11 listed. Merrydale was used as a set in the television dramatization by ITV of “Inheritance”, a book by Phyllis Bentley that chronicled the growth, dominance and gradual decline of the textile industry in these parts through the work, imagination and inventiveness of a particular family, the Crowthers.

This was in the early 1970’s, before we came to live here. We have tried to preserve the integrity of the hamlet and have buried all the phone and electricity cables. By the time that we came to restore the barn and cottage in the year 2000, all that remained of the cottage was half of the south-facing wall, and the barn roof was on the verge of collapse. The huge queen truss in the living room was salvaged from a mill (under demolition) to replace the original queen truss that was, sadly, found to be beyond repair.

As the barn had been built without foundations and with a sloping floor, the restoration was an enormous undertaking and far more onerous than anticipated. We were pleased to be able to find local building materials, in particular, the chimney that we came across when walking in a nearby wood. This clearly pre-dates the Merrydale settlement and carving within it suggests that it may have been used by the Knights Templars (who in turn recycled Roman materials).

The uprights to either side of the kitchen fireplace are recycled from the cattle enclosures in the barn, hence the holes (that used to contain timber posts). The stone floor is from a nearby quarry and we hope that you enjoy the under floor heating as much as we did when we lived in the cottage for two years (while completing it).

The well known sculptor, Brian Fell, specially made the weather vane for us and has recently made the pods/swing seats next to the dam. There are cushions for these in the nearby stone shed, as well as a towel with which to dry them before positioning the cushions, if necessary. 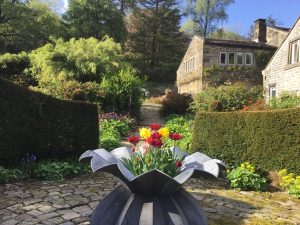 Our postcode is HD7 5UZ and you can contact Tyas Cottage by phone:

How to find us